Science Class 8 – Chapter 14- Chemical Effects of Electric Current – NCERT exercise solution (Question-Answer) is provided below. Total 12 Questions are in this NCERT Exercise, all are solved here

Answer- acid, base and salts.

(b) The passage of an electric current through a solution causes _________efffects.

(c) If you pass current through copper sulphate solution, copper gets deposited on the plate connected to the ___________terminal of the battery.

Q2. When the free ends of a tester are dipped into a solution, the magnetic needle shows deflection. Can you explain the reason?

Answer– The deflection in the magnetic needle shows the current is flowing and solution conduct electricity. Hence, the circuit gets complete and behaves like a good conductor.

Q3. Name three liquids, which when tested in the manner shown in Fig. 14.9, may cause the magnetic needle to deflect. 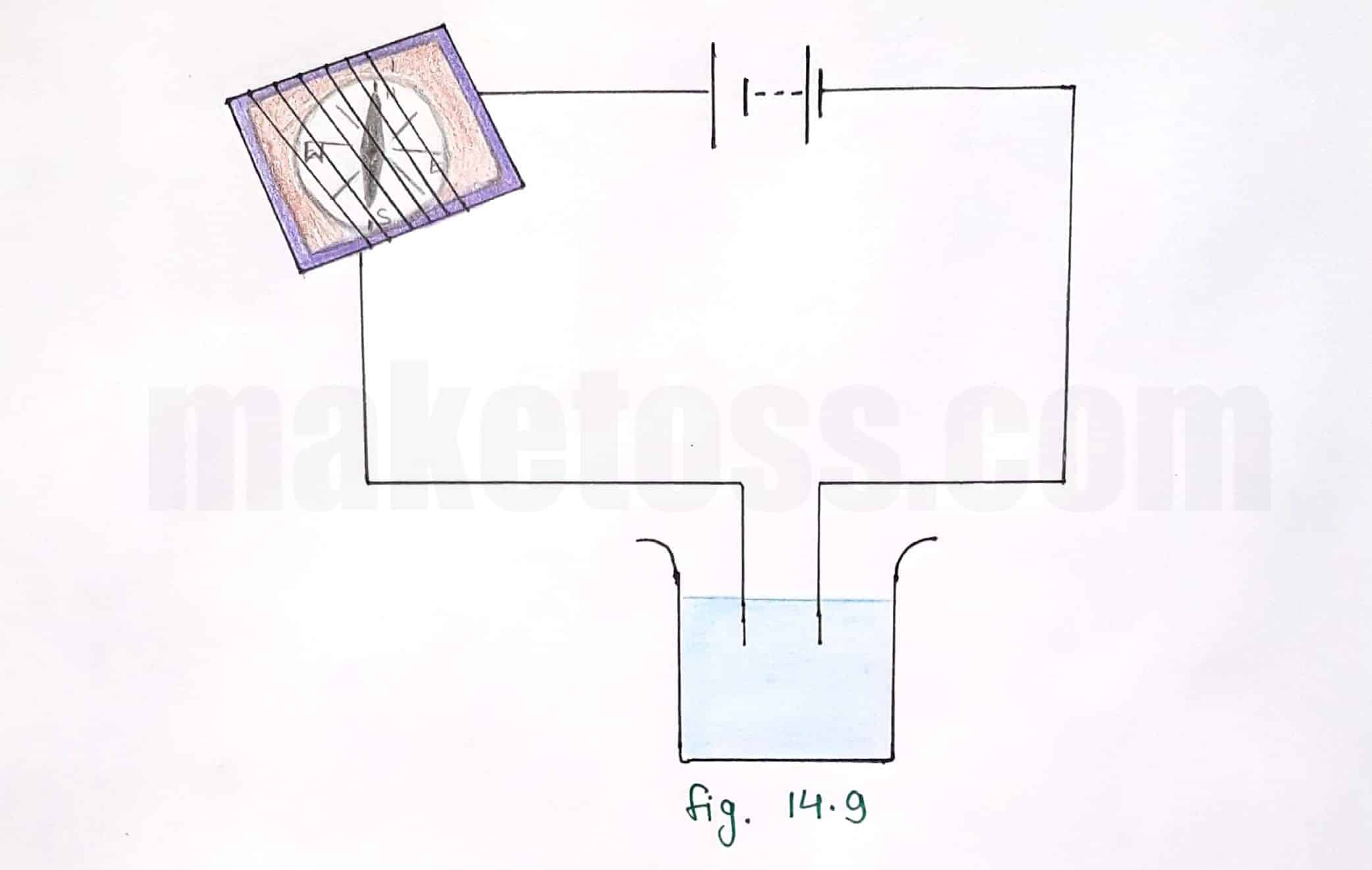 Q4. The bulb does not glow in the setup shown in Fig. 14.10. List the possible reasons. Explain your answer. 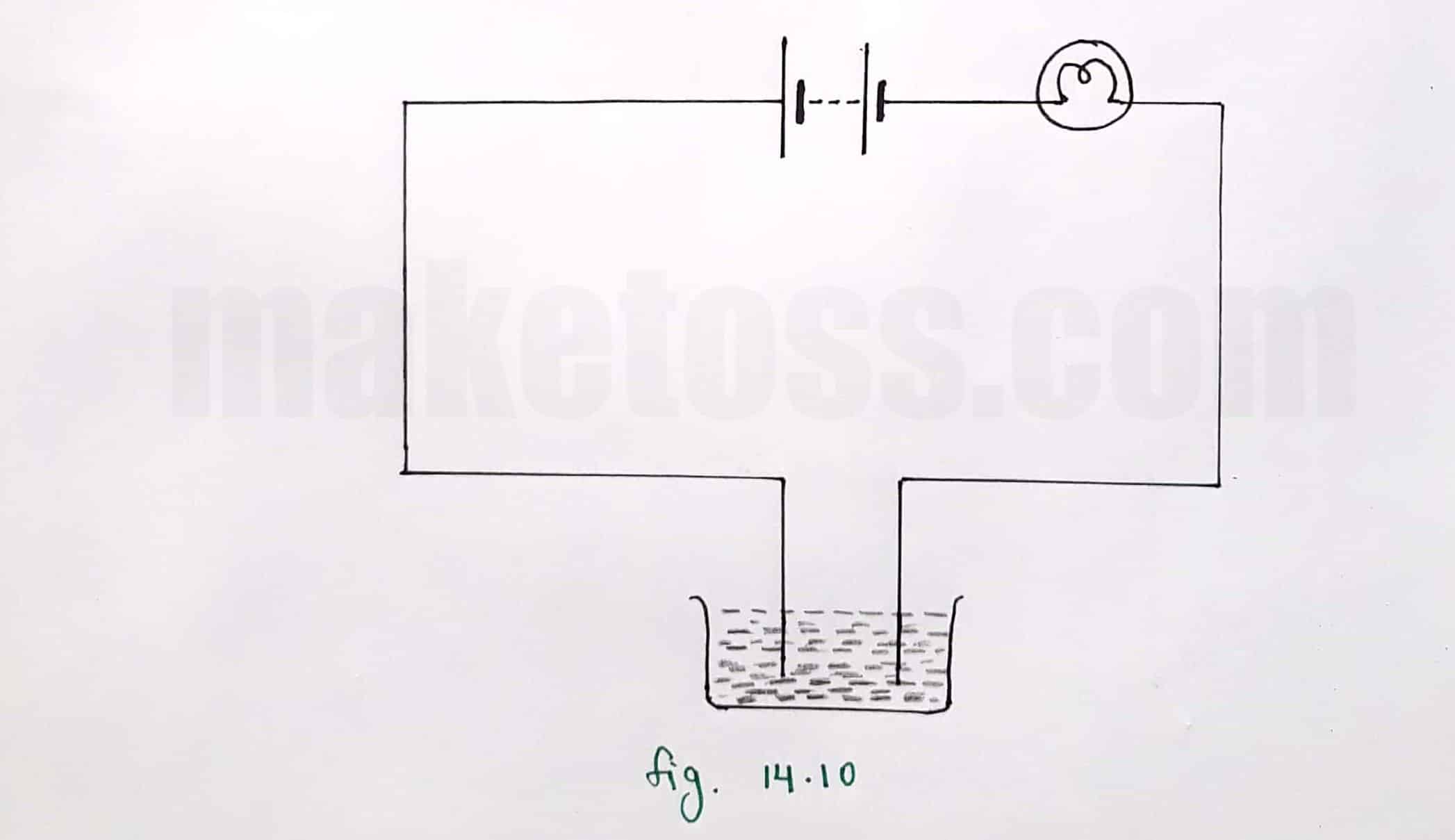 Answer– There are some reasons when the bulb doesn’t glow:-

Q5. A tester is used to check the conduction of electricity through two liquids, labelled A and B. It is found that the bulb of the tester glows brightly for liquid A while it glows very dimly for liquid B. You would conclude that-

(i) liquid A is a better conductor than liquid B.

(ii) liquid B is a better conductor than liquid A.

(iii) both liquids are equally conducting.

(iv) conducting properties of liquid cannot be compared in this manner.

Answer- (i) liquid A is a better conductor than liquid B.

Q6. Does pure water conduct electricity? If not, what can we do to make it conducting?

Answer- No, pure water can not conduct electricity. We have to add some salt to make it conducting.

Q7. In case of fire, before the firemen use the water hoses, they shut off the main electrical supply for the area. Explain why they do this.

Answer- In case of fire, before the firemen use the water hoses, they shut off the main electrical supply for the area they use impure water. So, it conducts electricity means it is a good conductor of electricity.

Q8. A child staying in a coastal region test the drinking water and also the seawater with his tester. He finds that the compass needle deflects more in the case of seawater. Can you explain the reason?

Q9. Is it safe for the electrician to carry out electrical repairs outdoors during heavy downpour? Explain.

Answer- No, it is not safe to repair electrical appliances outdoors during a heavy downpour because rainwater contains a small amount of acid. So, that water becomes a good conductor of electricity.

Q10. Paheli had heard that rainwater is as good as distilled water. So she collected some rainwater in a clean glass tumbler and tested it using a tester. To her surprise, she found that the compass needle showed deflection. What could be the reasons?

Answer- Rainwater is pure but many impurities and gases like sulphur dioxide and nitrogen oxide etc, dissolved in rainwater while it falls on the earth through the atmosphere which makes it a good conductor of electricity. So, the compass needle showed deflection.

Q11. Prepare a list of objects around you that are electroplated.

Iron which used in constructing building coated with a layer of zinc, door handles, the handlebar of cycles and bikes, metallic almirah etc.

Q12. The process that you saw in Activity 14.7 is used for purification of copper. A thin plate of pure copper and a thick rod of impure copper are used as electrodes. Copper from impure rod is sought to be transferred to the thin copper plate. Which electrode should be attached to the positive terminal of the battery and why?